While we expected a market correction (as stated in the last update), we could not have foreseen the trigger to be the Corona Virus. The slowdown in the global economy – which in fact had already begun in the second half of 2019 – has been drastically accelerated by the pandemic. Panic selling, a lack of liquidity, and paralysis in the interbank “repo” market (repurchase agreements which uphold a balance of liquidity vs. government securities between banks) forced the Fed to take unprecedented measures. The Fed reacted by buying bonds, lowering interest rates to 0%, and have begun providing loans to five central banks to meet the dollar deficit in world markets. These measures temporarily stabilized the markets and we could see stabilization (reduced volatility) if not a technical rebound in the coming days. However, we expect the fall to resume in the second half of April, when corporations begin to report earnings for the first quarter.

Ultimately, we expect US indices to fall 40-50% from the February peaks. After such a fall, there will be an opportunity to invest in American and European stocks. Below are examples of large falls in the market during major crises. With the exception of 1929-1932, the first waves, indicated by the letter A, were the fastest and largest. So far, we probably have witnessed only 2/3 of the anticipated correction.

At this point in time, it is hard to say if this is the beginning of a systemic crisis that will last 1-2 years, or whether it could be even longer than the crisis in 2008. However, we can already say for sure that deflationary pressure will increase and pull down stock prices, raw materials and other financial assets. Deflation[1] is the main enemy of the modern financial system, and therefore the reaction of the Central Banks is clear: they will continue to print money and buy bonds and likely also equities. If we consider what has happened in Japan for the past 30 years in this context, the prospects are sobering, to say the least. Japan still has not recovered from the deflationary consequences of the real estate and stock markets bubble bursting in 1989.  Currently, the bond market confirms expectations of deflation. On the chart below, one can see that in periods of deflation, cash is the best asset that will enable you to invest in stocks and other assets with a 60-70% discount.

[1] A little bit of inflation is good for economic growth—around 2% to 3% a year. But, when prices begin to fall after an economic downturn, deflation may set in, causing an even deeper and more severe crisis. As prices fall, production slows and inventories are liquidated. Demand drops and unemployment increases.

And the chart below shows the index of raw materials and agricultural products, which continues to fall since 2008.

Central banks will try to increase the money supply in order to prevent the drop in prices (deflation). The chart below shows the velocity of money (one of the components of inflation) in the United States in 1929 and how the great depression reduced this speed and thereby caused deflation. The second graph shows the velocity of money in our time and the expected forecast for 2020. This comparison demonstrates why we expect deflation in the near future. Beyond this predicted cycle, at one point in the more distant future, the velocity of money will begin to grow again and this will cause inflation. (When the time comes, will prepare our clients’ portfolios for that event as we have prepared them for the coming deflationary cycle.) 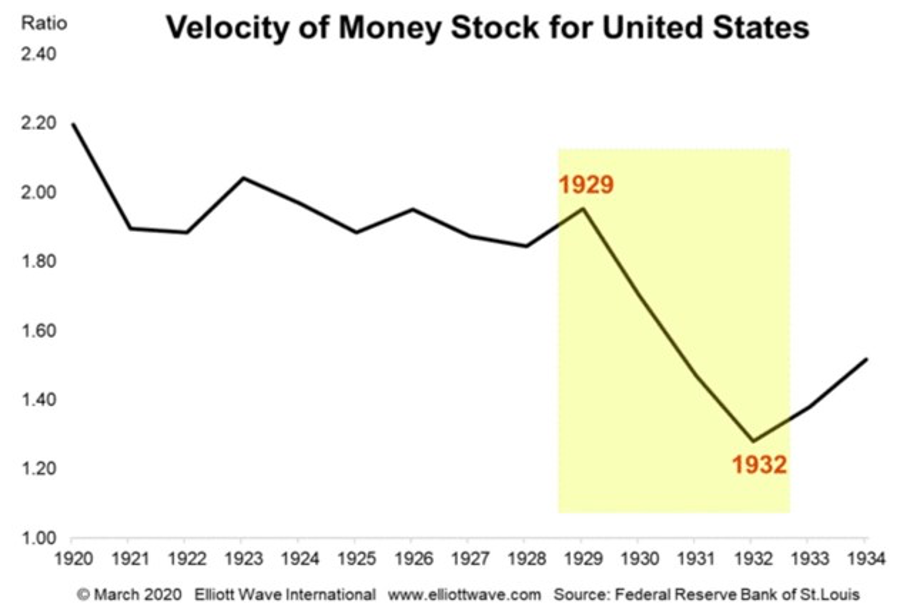 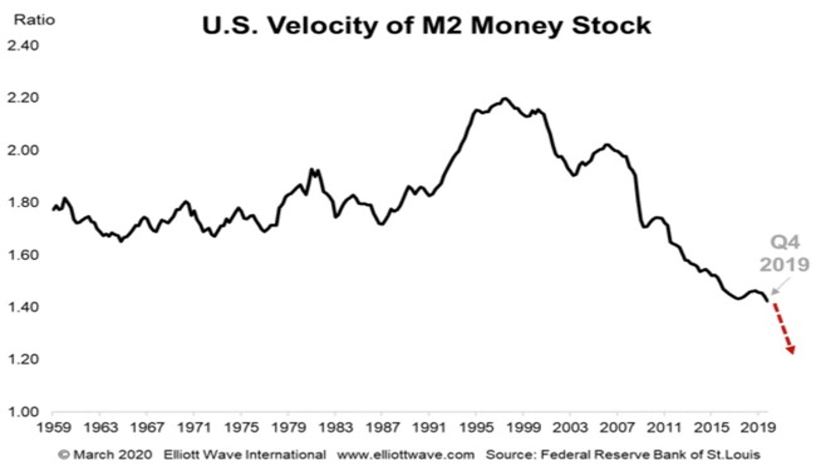 During a modern-day financial crisis, there is a shortage of dollars, because the offshore banking (wholesale shadow banking) system ceases to satisfy the demand for dollars. A dollar deficit then leads to a rise in the dollar against other currencies and causes a drop in gold prices. We expected the Euro to rise against the USD to within the range of 1.15-1.18 during 2020. However, on March 9, the Euro jumped to almost 1.15 and plummeted. We were surprised at such a quick U-turn. However, now we expect the Euro to fall to 0.98 or even lower against the USD (i.e. we expect the USD to strengthen, as described above). Gold will also fall as the crisis deepens. We expect gold to fall to USD 1000 and possibly lower in the medium turn. However, we would not be surprised if we first saw a jump in gold above USD 1700 thanks to its safe haven status. (Note from the editor 30.03.2020: this last jump occurred after this piece was written on the 26th of March. Gold’s rise is likely now over.)

The price of oil, like all commodity markets, falls in a deflationary period. We expect oil to fall to USD 10, as it was in the late 90s. However, this fall may take 1-2 years, in which case the dollar will rise to 90-100 Rubles. But before the Ruble falls, it will still strengthen and there will be an opportunity to buy the Rubles against USD (Note from editor: i.e. to sell USD and buy Rubles. Again, this move is already occurring and the timing is good to buy Rubles now 30.03.2020). 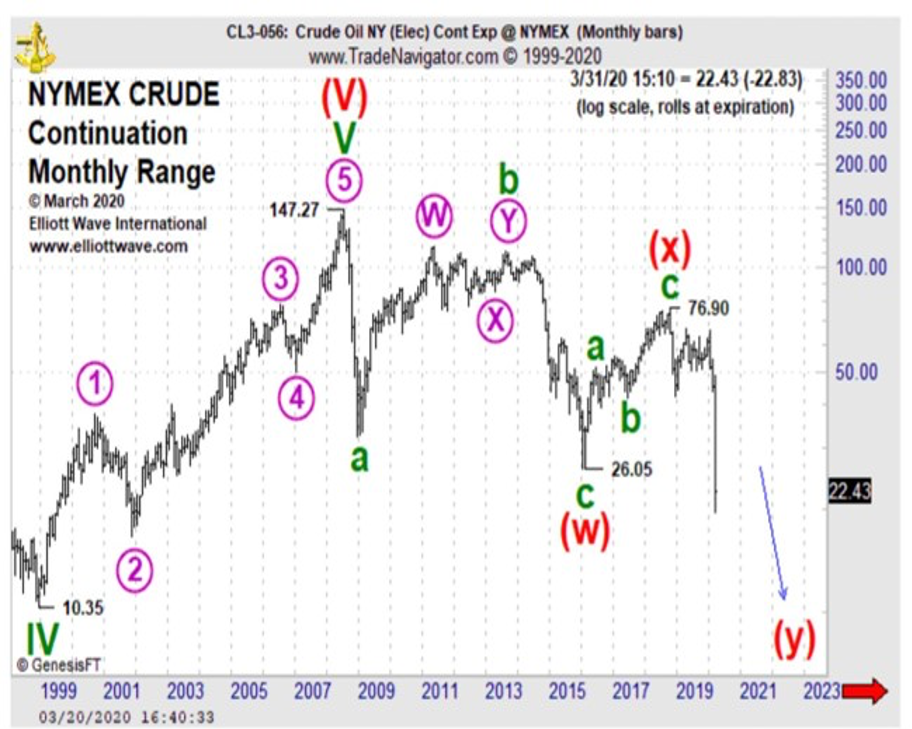 Credit market rates have fallen to historic lows. However, we  would refrain from investing in long term bonds, or bonds with a rating below investment (BBB). Liquidity in the low-rated bond market has decreased by more than 80% since 2007 (due to the introduction of the new Basel III banking rules). Falling prices of BBB rated bonds and lower began at the beginning of March and the market for them has largely dried up altogether – they are no longer liquid and the likelihood of defaults among this lower credit quality has risen sharply.

The low-rated bond index fell by 28%, and the chart below shows the difference between the yield of government bonds and the average yield of low-rated bonds. Rates in dollars will probably be lowered to below zero, so bond yields will be very low. It will be possible to consider options for investing in government bonds in Mexican pesos, Turkish lira or rubles, but only after an additional drop in these currencies. 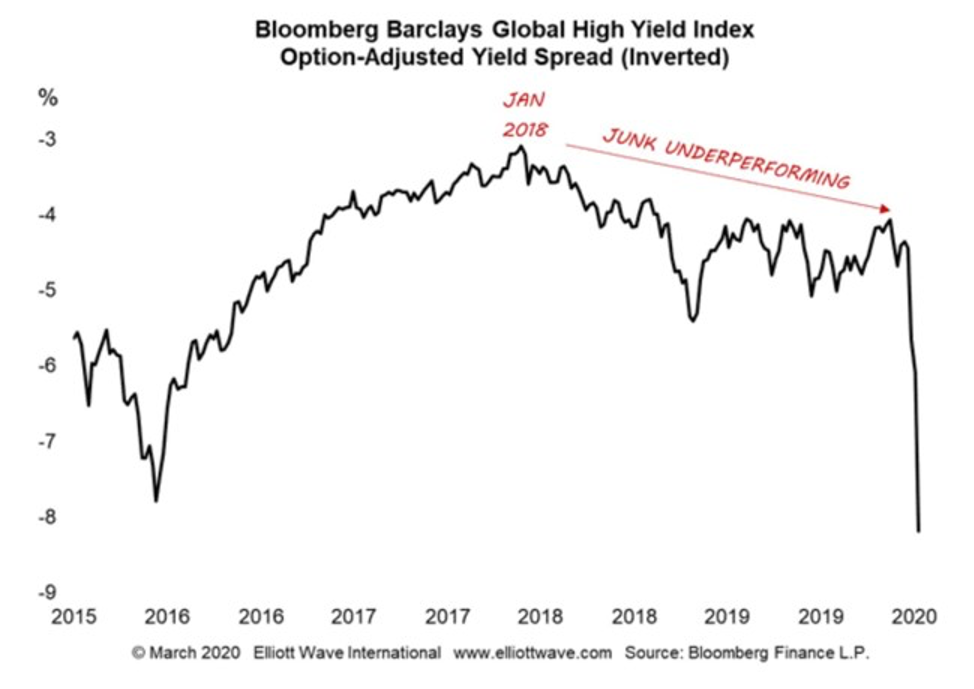 There is a risk of Bitcoin falling to $ 4,000, however, this will be a good opportunity to re-enter the cryptocurrency. I continue to view Bitcoin positively for the long term.

Share This
We use cookies to ensure that we give you the best experience on our website. If you continue to use this site we will assume that you are happy with it.OkRead more