it’s gotta get worse, before it gets better

Markets partially recovered after the March fall and the Nasdaq index even entered positive territory since the beginning of the year. However, if you carefully look at the macroeconomic picture and statistics, the situation does not look as rosy as stock markets paint it for us.
The rapid recovery of markets suggests that investors expect a quick recovery of the global economy; the so-called “V” shaped recovery. However, all economic data speaks more about a long and deep recession. At its depths, recovery will begin, but it will also take several years.

The global economy began to slow down long before the onset of the Corona pandemic.  Germany entered a recession at the end of 2019, the manufacturing sector in the United States was also in recession, world trade turnover fell sharply in the 4th quarter of 2019, and global car sales began to slow down significantly from mid-2019.

The chart below shows the level of investment by American corporations in business. It is interesting to note that investments began to decline in the 2nd quarter of last year. 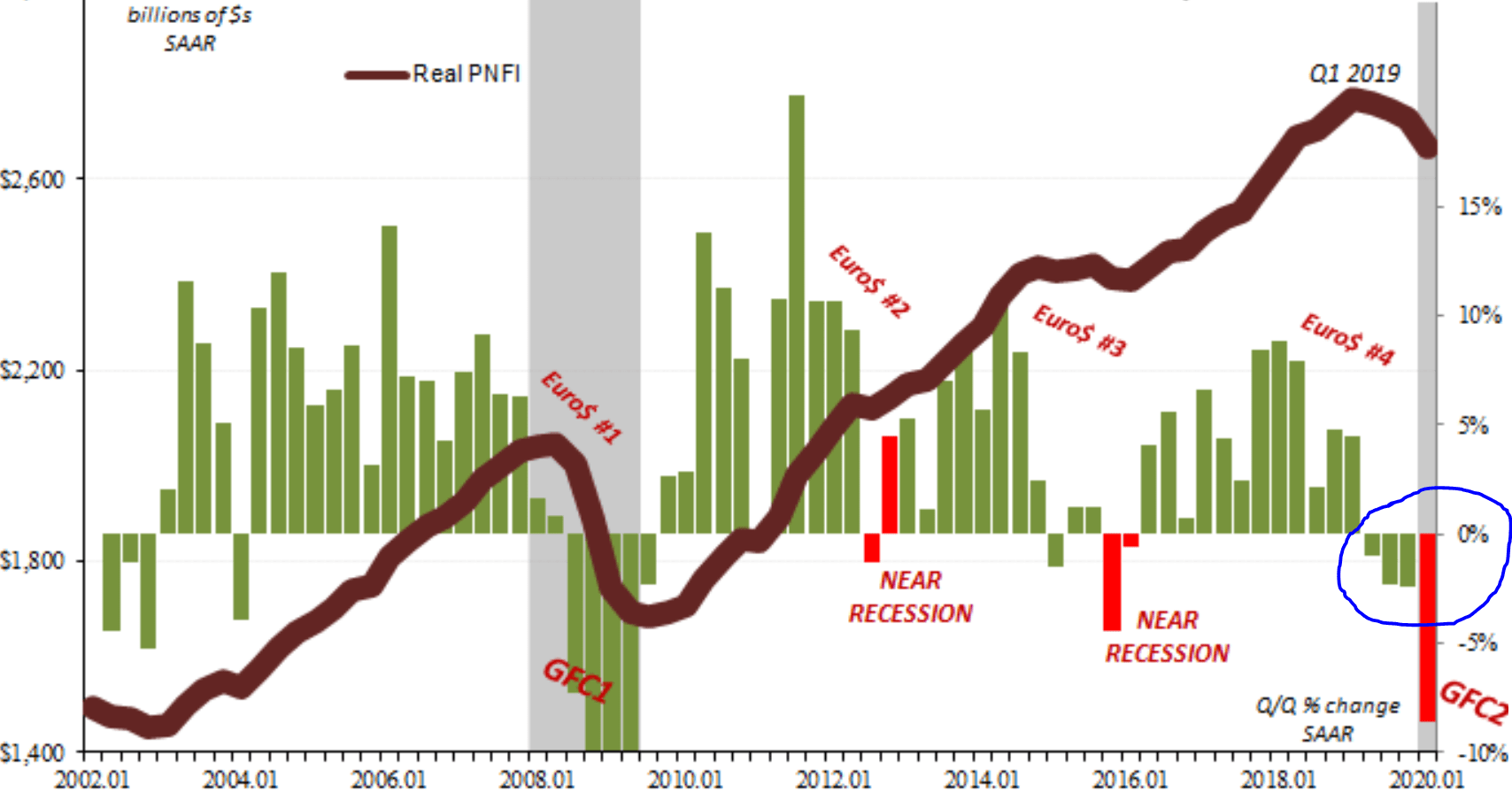 U.S. imports fell significantly in the 4th quarter of 2019, and yet again in Q1 quarter of 2020, furthermore indicative of the slowdown in the US economy. 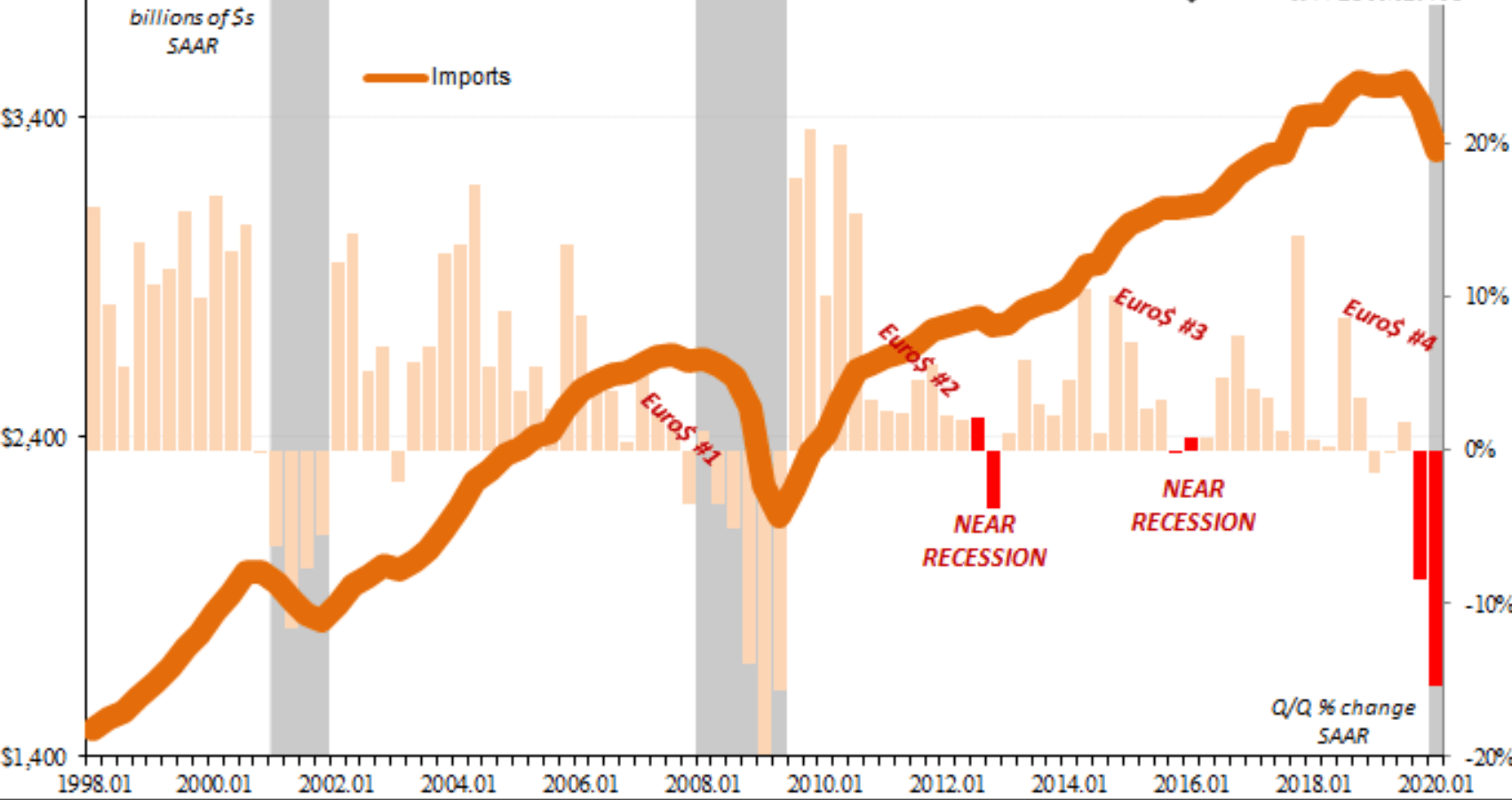 A fall in business activity, investment, and trade from Q3 2019 reflected a slowdown in US GDP growth. Q1 2020 figures fell twice as much: -4.8%. Of course, the pandemic affected negative growth in the first quarter, but the decrease was not all due to this. The quarantine in the U.S. was introduced only in the second half of March. We will really see its full effect on economic growth with Q2 2020 earnings reports.

In early December, I wrote about a 25% drop in the stock market and my forecast was based on the negative growth dynamics of the global economy from the second half of 2019. The virus accelerated the process of economic slowdown and increased the decline in world indices.

Below we see the US GDP graph.

Another significant factor affecting the long-term growth potential of the US economy is the employment of the able-bodied population in the United States. This indicator fell to the level of the beginning of the 70s. It is interesting to note that 5 million people out of 36 million who lost their jobs said they would not even try to look for a new one. The economic term for people who could work, but effectively have given up looking is: “discouraged workers”. Employment among able-bodied population began to decline after 2000 and in 2008 the amount of such “discouraged workers” accelerated. This suggests ominous structural problems in the US labor market that will seriously drag on economic recovery.

Employment of the able-bodied population, in the graph below, is a much more relevant statistic for analysis than the unemployment rate, which does not include “discouraged workers”. 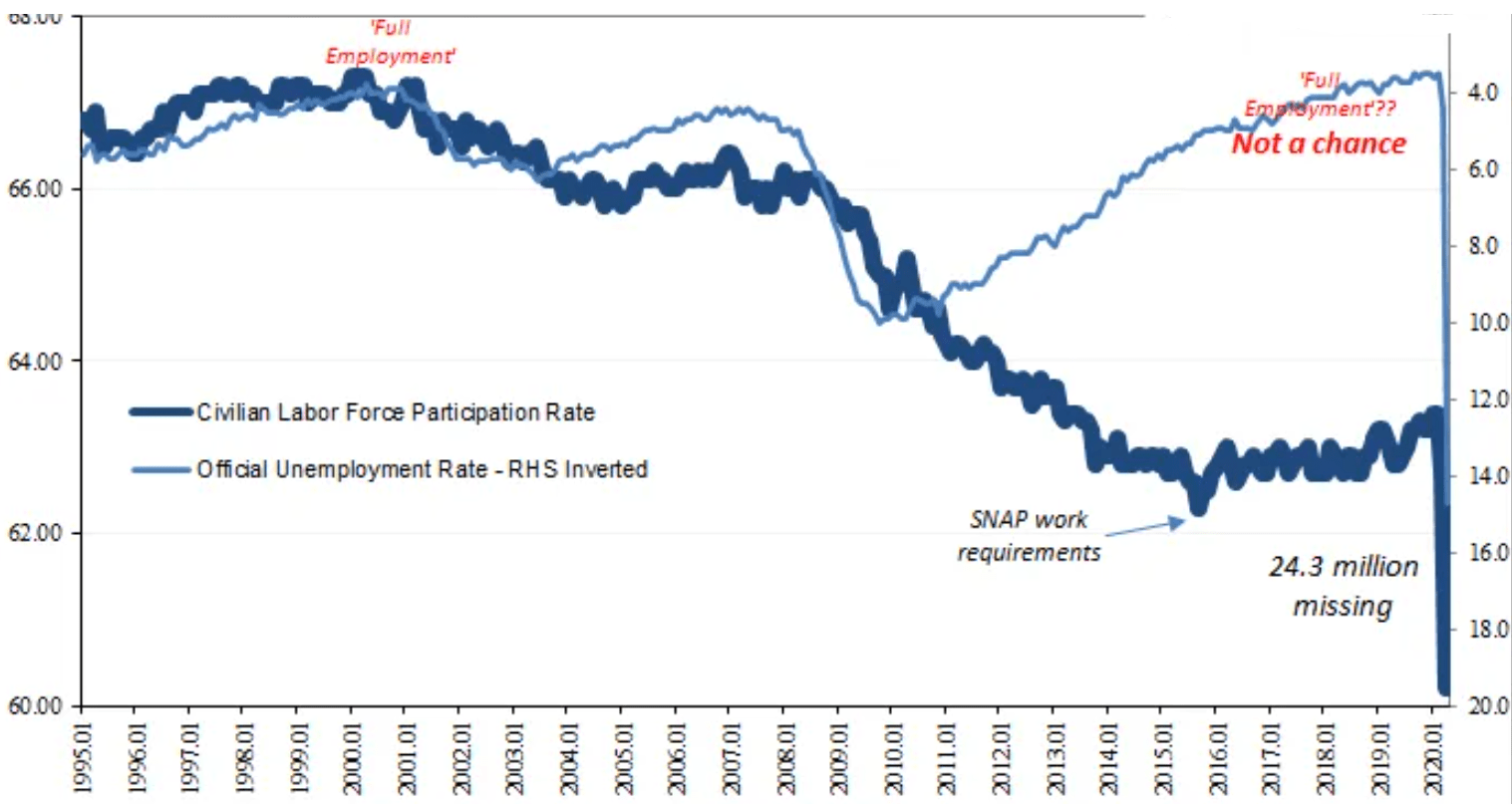 On the chart below we see the n consumer lending rate, whereby the decline in March was more than in 2008. Moreover, these are only figures for March. Going forward, these numbers will certainly deteriorate given the increased risks of consumer credit in the current environment. 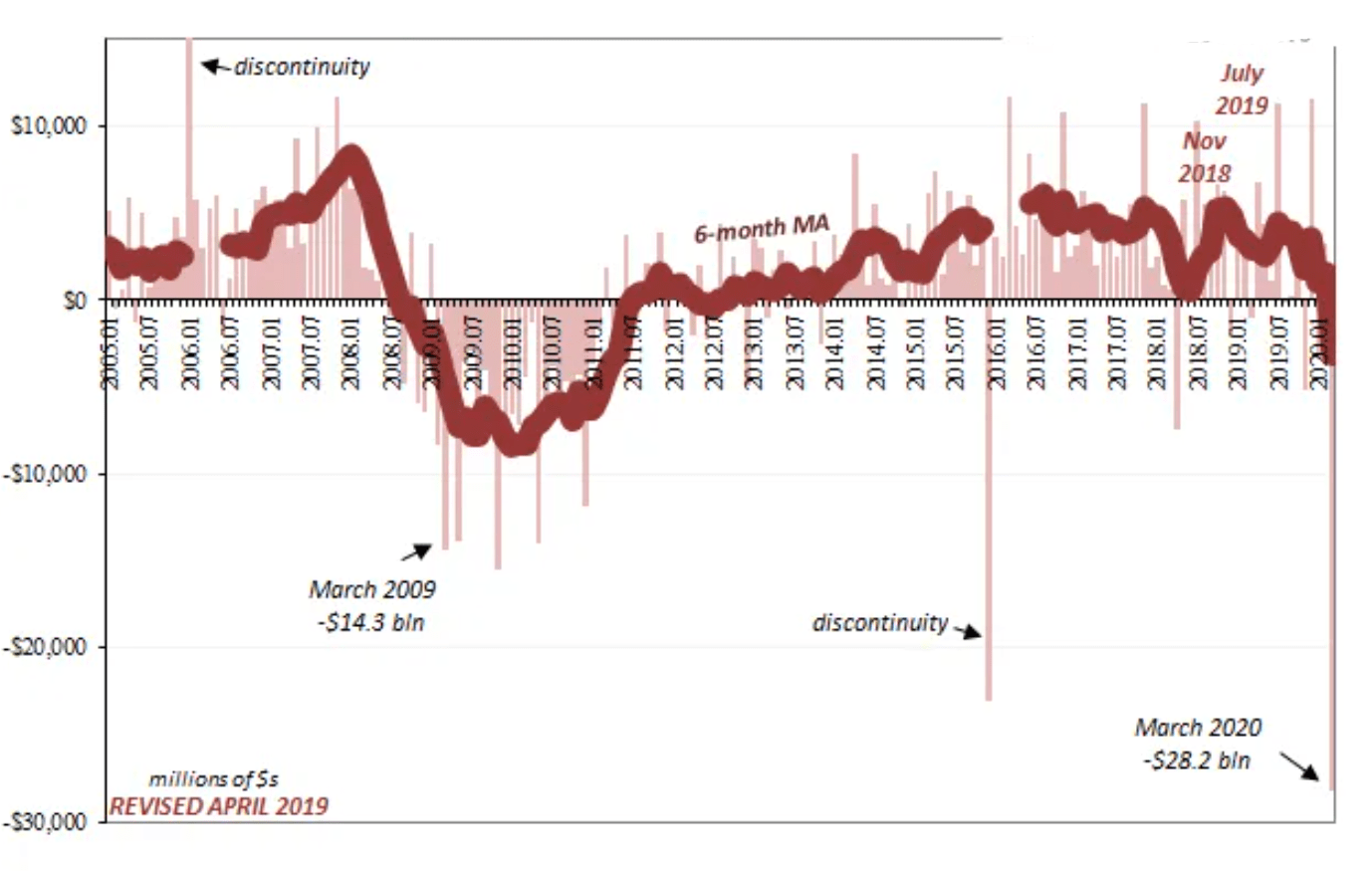 Banks have reduced the issuance of loans to companies and households, which will greatly inhibit the growth of the economy.

On the one hand, banks are reducing lending to the population, on the other, the population is cutting spending to increase savings and pay off debts. Thus, in our opinion, there is no point in seriously contemplating a speedy economic recovery.

Below is the Retail Sales numbers in the United States.

A decrease in lending, an increase in savings in both the private and corporate sectors will lead to a decrease in consumption, which in turn will increase deflationary pressures in the global economy: that is, prices will fall for goods, services, and financial assets.

Below we see confirmation of deflationary pressure. The US price index has fallen to a historic low.

Our big concern around deflation is this: The Fed has been buying government and corporate bonds worth $ 3 trillion since September 2019 (when the REPO interbank market was failing, as explained in our previous market commentary). However, this has not led to an increase in inflation expectations among the population and market participants. One of the main reasons is that this money is deposited in the form of bank reserves and does not go for real lending to households and corporations. Another reason is the already existing high rate of personal and corporate indebtedness.

Banks are reducing lending to businesses and households, and the uncertainty regarding the future is forcing households and companies to create a financial “cushion” of reserves and also to pay off existing debts. In order to do this, the postponement of investments – and reduction of expenses and hiring – is inevitable. The graph below confirms that bank consumer (private) lending is declining.

History has proven that an increase in the money supply of $3.6 trillion in the United States since 2008 has not led to inflation, and economic growth has been below average over the past 70 years. However, financial assets rose in value significantly.

Below is a comparison of yields on 10-year government bonds in the USA from August 2007 (the beginning of the last crisis) to the present and from the beginning of the great depression from October 1929 to 1962. The yield on 10-year government bonds reflects the expected inflation rate and economic growth potential in the future (the higher the growth potential, the greater the chance of inflationary pressures in the future and, therefore, the higher the yield on bonds). The dark blue line is the yield on 10-year bonds from 1929 to 1962, and the light blue since 2007.

It took more than 30 years for inflation to return to the pre-crisis level of 1929, despite the Fed’s constant support through purchases of US government bonds since 1930. At the beginning of 1932, the Fed spent more than $1 billion (in 1932 prices) on the purchase of bonds. In 1933, the US Congress passed a law requiring the Fed to buy back government bonds issued by the Roosevelt government for $3 billion (in 1933 prices) and gave the president the right to devalue the dollar by raising the price of gold by 69%. Even a large increase in spending on World War II failed to push inflation. 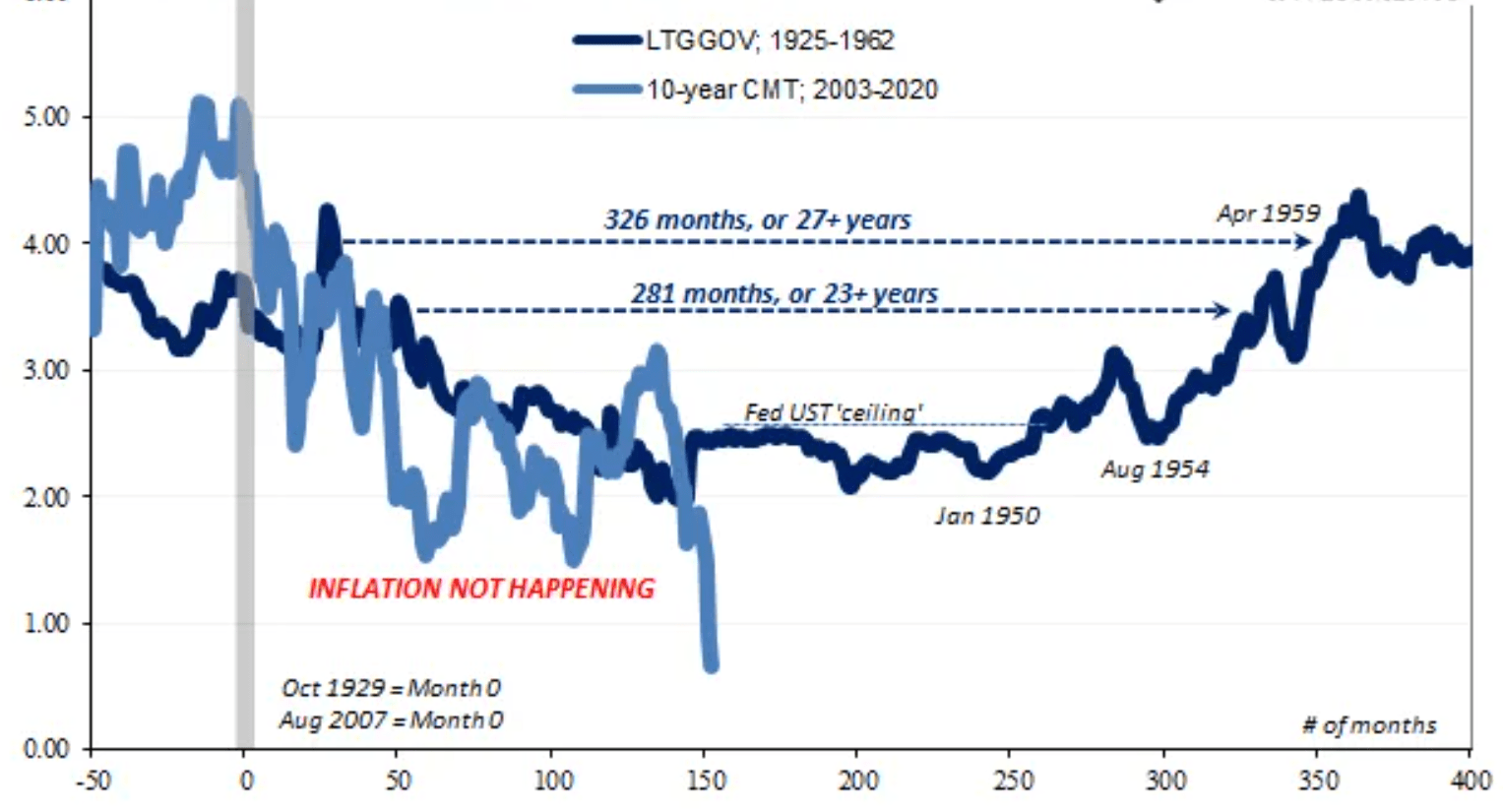 When inflation began to rise after 1967, this growth was not stopped until 1983, by raising the refinancing rate to 19%. As history shows, the Fed cannot always achieve the desired result: i.e. stable inflation and full economic growth. Structural changes in the labor market, an aging population, changing societal attitudes toward consumption, high personal and corporate debt levels, and most importantly, a shortage of dollars in the offshore interbank market will be the main obstacles to combating deflationary pressures. As history shows, central banks are often powerless in dramatically changing economic trends.

It is enough to look at the Japanese economy, which has stagnated for 30 years despite the Japanese Central Bank (JCB) purchases of bonds and shares for 19 years. The JCB has consistently failed to reverse deflation and low economic growth. The JCB doubled stock purchases in March 2020…while the Nikkei fell 31%. The Nikkei is in fact almost 50% below the maximum achieved in 1989. Even if the Fed follows the example of the JCB and starts buying US stocks, it is by no means a guarantee that the stock market will go up.

From the examples of the USA in the 1930s and 2008, and Japan since 2001, it is clear to us that the policy pursued by the Central Banks does not accelerate economic growth and reduce the risk of deflation. The bond market indicates no expectation of 1) a quick recovery in economic growth and, in the first in the history of the US market, 2) negative rates in the USA at the beginning of next year.

The chart below shows the Nikkei in green and the blue bars are the weekly stock purchases by the Japanese Central Bank. 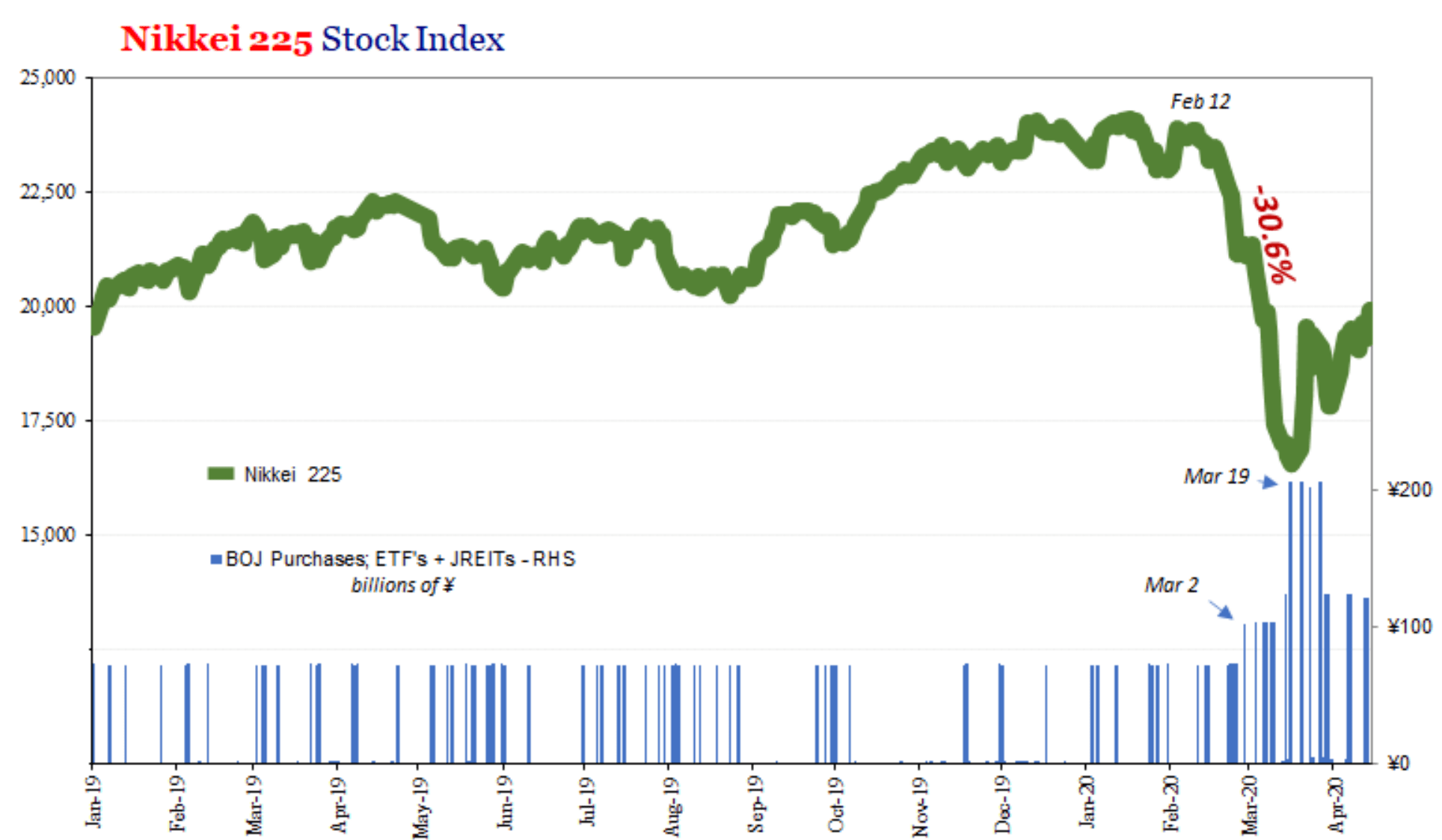 In conclusion for the near term, we expect an increase in prices for US government bonds and high-rated corporations. It would not be surprising to see the yield on a 10-year bond fall to 0% (the yield is currently 0.7%) which would increase the price of these bonds by 5-6%. And the 30-year bond prices could increase by 10-15%.

The stock market is indicating a completely different story; indicating that the economic recovery will be quick. We do not believe in the recent stock market rally and expect another drop. The depth and speed of the next drop is uncertain, but it will come. The famous investor Paul Tudor Jones (who manages $10 billion) recently announced that due to the inability of the central banks to break the trajectory of slow economic growth after 2008 and the possibility of inflation of financial assets in the future, he has invested 1-2% (100-200 million) in Bitcoin.

Rinat continues to look positively at Bitcoin and expects prices to rise above $ 20,000, i.e. the level that we saw in 2017. If we added 1% of Bitcoin to a balanced portfolio 5 years ago, it would be yielding overall 9.2% per annum compared to 7.2% without Bitcoin. However, if the price of Bitcoin had dropped to zero over the past 5 years, then the portfolio would have returned only 7% (0.2% difference). This simulation shows that the risk taken (0.2% per year) potentially justifies an increase in income of 2% per year. In addition, Bitcoin is not strongly correlated with financial markets, which gives the effect of diversification and portfolio stability.

Regarding oil: this year, the average oil price has been $41 since the beginning of the year. I expect the average annual oil price to drop to $15, that is, the “black gold” prices will be under deflationary pressure for a long time to come.

However, the medium-term forecast is shown in the graph below. 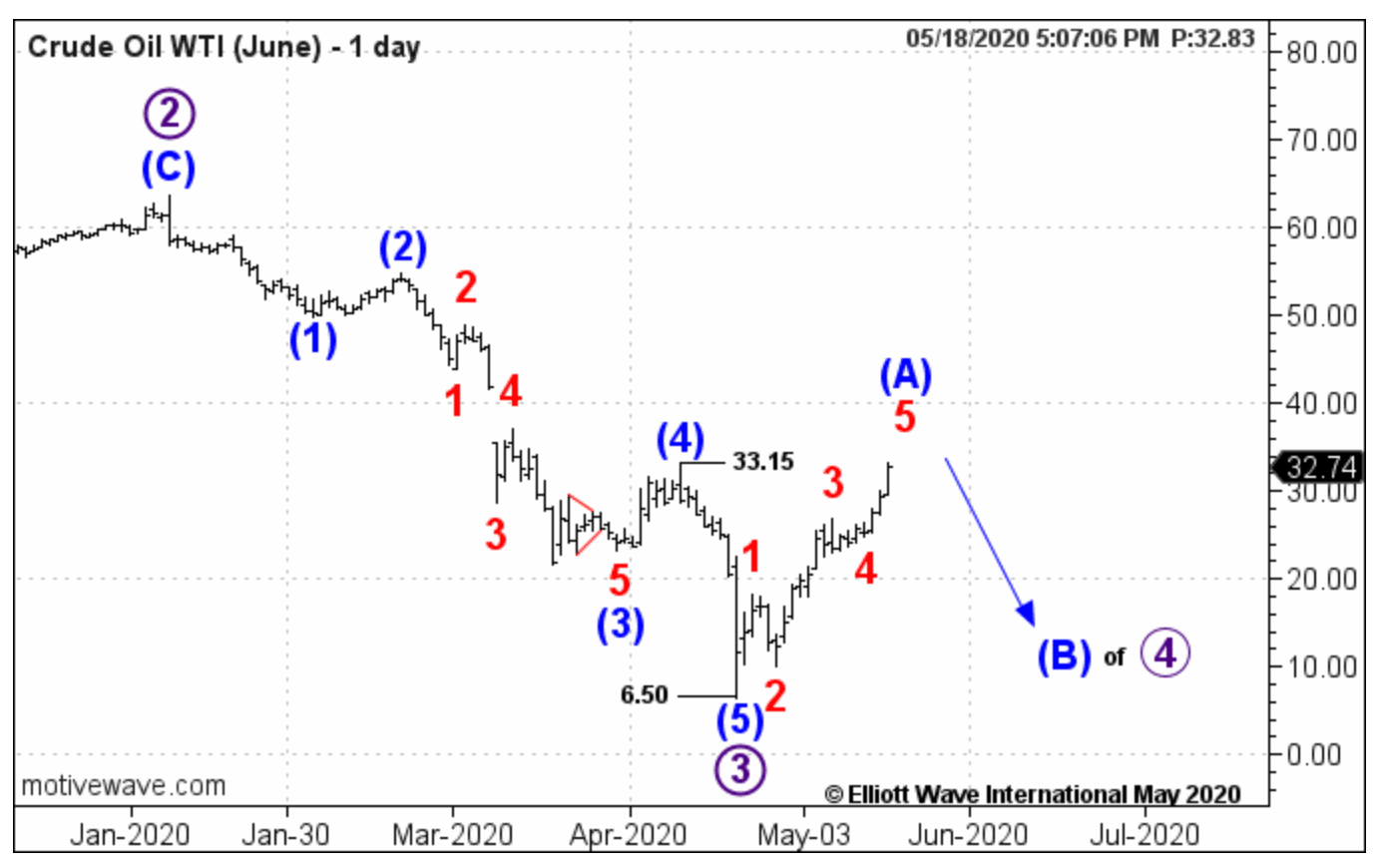 Gold will also be under pressure. Perhaps we will still see the price of gold 1800-1850, but then I expect a prolonged fall in price. The only precious metal where we believe the bottom might have been reached is platinum.

The chart below shows the forecast for gold. 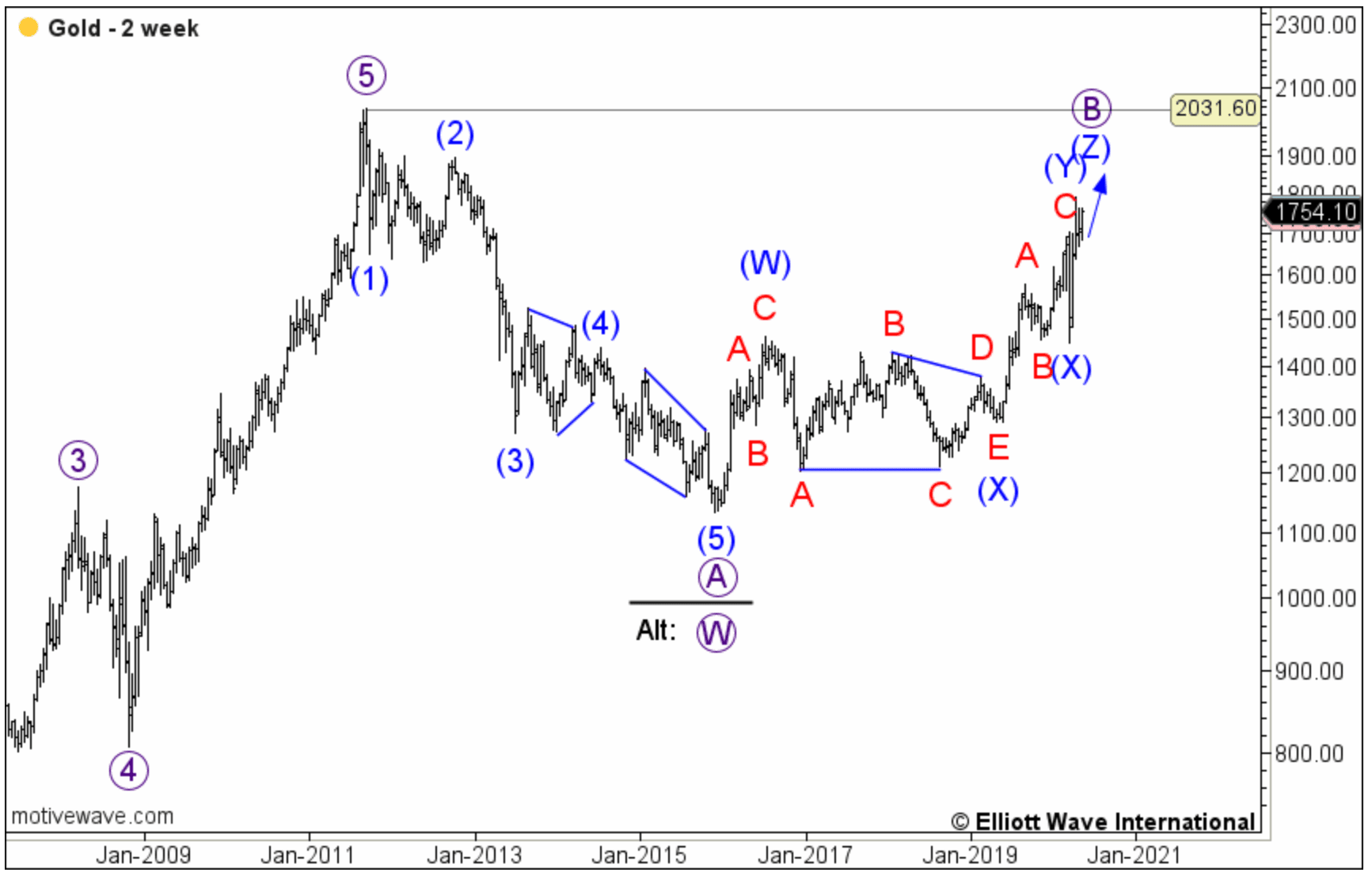 In the second gold chart below, the blue line shows the position of large speculators, and the red one shows the positions of investment banks. Usually the peak of the blue line coincides with the peak of the price of gold. Now there are many openly speculative positions on gold, in the hope that the price will continue to grow. However, as can be seen from the graph, a trend reversal is occurring. The fact that many investors are waiting for the price increase and invested in gold confirms the forecast that soon we will see a change in trend and the price will begin to fall. 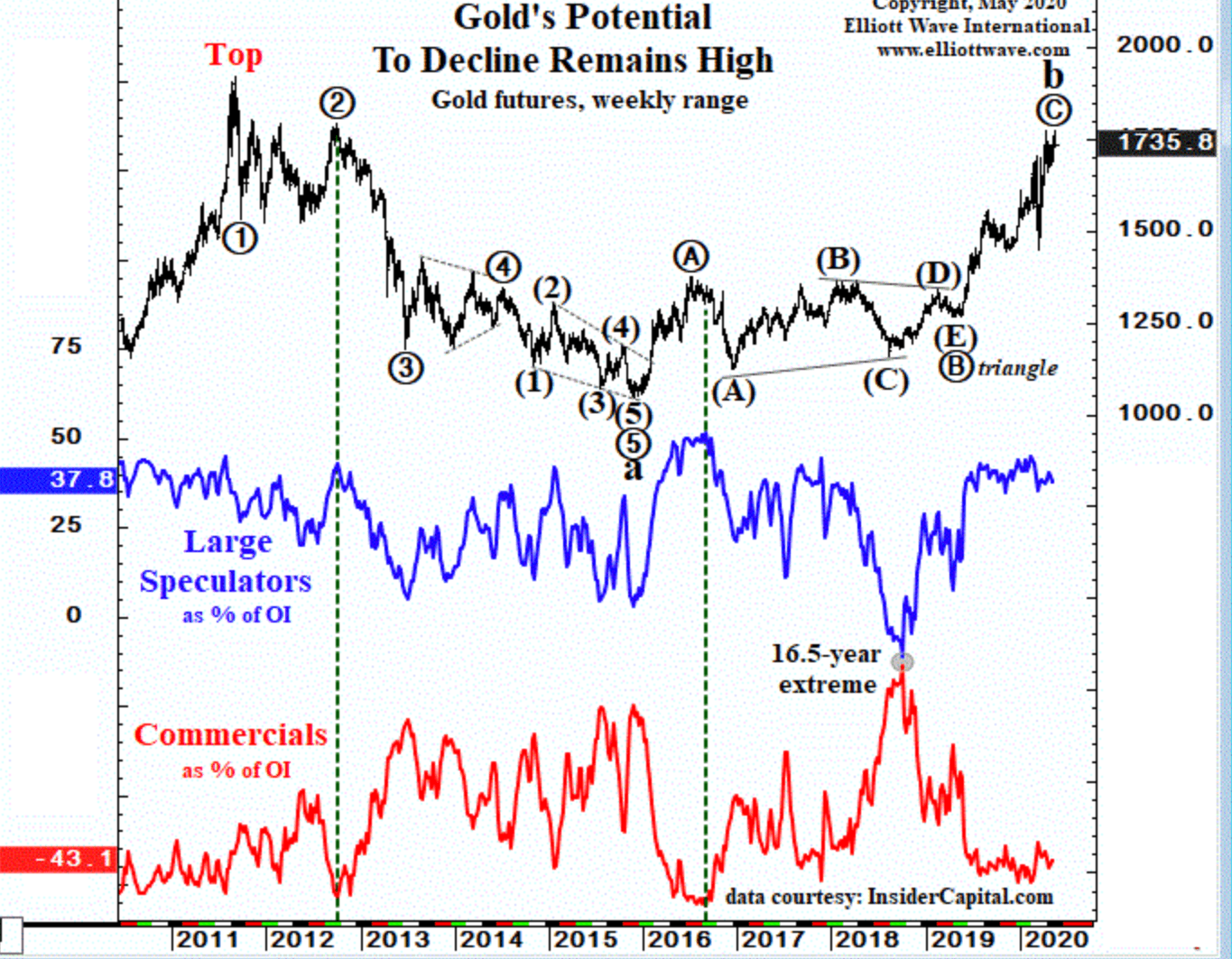 Share This
We use cookies to ensure that we give you the best experience on our website. If you continue to use this site we will assume that you are happy with it.OkRead more